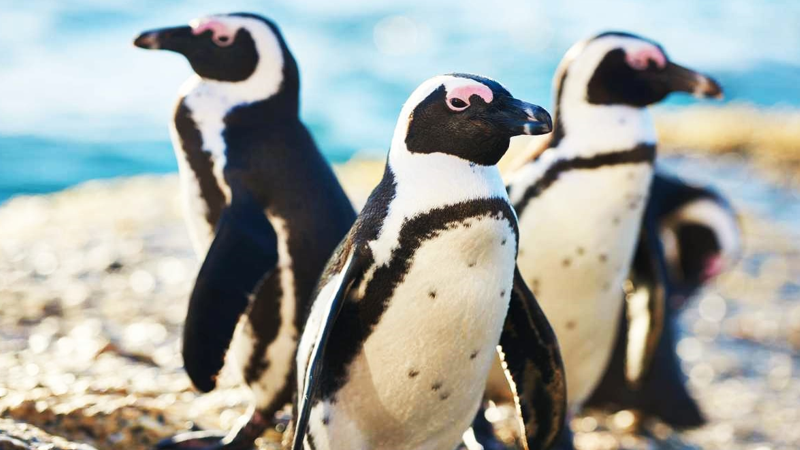 Did you know that Cape Town has a significant African penguin population? Popular attractions and activities like Table Mountain, Cape Point, safaris and the beach attract masses of tourists each year. However, not many people are aware of the thousands of penguins that inhabit South Africa’s Mother City.

The penguins in Cape Town are captivating. They’re charming, charismatic seabirds with interesting behaviours and a knack for pulling in crowds. But, the shuffling birds only occupy certain areas of the Western Cape.

Read on to discover where you can find these fascinating sea creatures and learn more about them.

Where can you see the penguins in Cape Town?

There are only a few places in the Cape where one can view African penguin colonies in their natural habitat.

The most popular area is Boulders Beach Cape Town. This is a nice recreational beach (great for swimming) on the Cape Peninsula in the suburb of Simon’s Town. The best area for viewing penguins, though, is Foxy Beach, which is only a few minutes away from Boulders on foot. Here, there are wheelchair-friendly boardwalks and one can get quite close to the penguins. Just don’t get too close, as their beaks are really sharp!

Another place where tourists can observe penguins in Cape Town is Stony Point Nature Reserve in Betty’s Bay. This is a small coastal holiday town in the Overberg. Stony Point, like Foxy Beach Cape Town, offers the opportunity to view Cape Town penguins up close, without disturbing the birds, via a boardwalk. Three species of cormorant are also present in the colony, along with Hartlaub’s gulls, Kelp gulls and Rock hyraxes.

Facts about the African penguins of Cape Town

Penguins in South Africa go by many names. These include black-footed penguin, Cape penguin, pikkewyn (Afrikaans) and nombombiyane (Xhosa). The flightless birds are commonly also called jackass penguins, due to the loud, donkey-like braying sounds that the species (Spheniscus demersus) makes.

The average adult African penguin reaches a height of 60 to 70 centimetres (24 to 28 in) and weighs between 2.2 and 3.5 kilograms (4.9 to 7.7 lb). They can dive for two and a half minutes underwater until they need to come up to breathe. Penguins in Cape Town feed on anchovies, sardines, squid and crustaceans.

People tend to think that icy, cold areas are where penguins live but this isn’t always true. While most species of penguin are native to the Southern Hemisphere, you don’t only find them in extremely cold places. In fact, only a few penguin species live very far south and there are several that thrive in temperate climates.

Jackass penguins have distinct pink-coloured skin patches above their eyes that help them tolerate changes in temperature. When the temperature rises, their bodies send more blood to the glands on these patches of skin. This causes the pink patches to change colour and darken, resulting in cooling of the glands.

Boulders Beach, also known as penguin beach Cape Town and Boulders Bay Cape Town, is a protected white sand beach in the Western Cape province that consists of inlets between granite boulders. The beach, which forms part of Table Mountain National Park, derives its name from these large smooth rocks.

At Boulders Beach, tourists can walk and swim with a colony of penguins in Cape Town that settled here in 1982. That is, if you can bear the cold water. The birds are used to people and will even walk beside you without hesitating. But, it is not advisable to touch or physically interact with the animals or feed them. They are in their natural habitat and are still wild penguins that can be dangerous and must feed themselves.

Going to Boulders Beach isn’t expensive, and families and friends can make a day out of it. You can have a tasty breakfast, walk and play on the beach and then go for a swim. Arrive early to see the penguins. Alternatively, if you want to see and do more, then you can book a tour of the Cape Peninsula. Our full-day Cape Peninsula tour takes visitors to iconic destinations, world heritage sites, seaside towns and, of course, Boulders Beach.

Stony Point Nature Reserve in Betty’s Bay is situated beneath the Kogelberg Mountain Range, along the South African Whale Coast. It is home to a large successful breeding colony of African penguins in Cape Town. The colony lies close the site of the old Waaygat Whaling Station that was in operation during the 1900s.

At Stony Point, tourists can meander along the walkway and view penguins swimming, interacting, sleeping and going about their day. It’s a pleasure to watch the birds from the well-designed boardwalk and there are loads of penguins. Moreover, one can view dassies, reptiles and various other seabirds while taking in the picture-perfect sights. The setting is beautiful. Again, it is best to avoid touching and interacting with the creatures.

The Stony Point Nature Reserve is approximately an hour away from Cape Town if you go by car. It has the same rules and regulations as Boulders beach but the entry fee is higher. Stony Point is not as busy as Boulders. This is a good thing, as tourists do not have to queue to capture amazing photos of the black and white penguins. The reserve has the feel of an undiscovered coastline retreat. There is a restaurant on-site.

Why you should visit the penguins in Cape Town

Visiting the African penguins at the Boulders Cape Town, Foxy Beach and Stony Point is a unique and enjoyable experience. The waddling sea birds are adorably cute and the colony sites are visually stunning. There are very few places in the world where one can view penguins in their natural environments like this, much less swim with them. The penguins roam freely throughout the areas and are naturally curious. It is not uncommon to find them examining picnic baskets or bobbing alongside tourists in shallow waters and playing in the waves.

There’s another good reason to go and see the penguins in Cape Town… They may not always be there! African penguins, once numerous throughout southwestern Africa, are now an endangered species. This comes as a result of oil spills, pollution, overfishing and habitat destruction. In 1910, there were approximately 1.5 million African penguins worldwide. This number dropped to around 150 000 by the end of the 20th century. Fortunately, there has been some population growth in recent years but this could change.

You will find African penguins in the Western Cape all year round. However, they are most numerous during the breeding season, which runs from February to August and peaks between March and May. During this time, you will see be able to see mom and dad penguins taking turns to incubate their eggs in shallow burrows. If you go between November and January, the penguins may look somewhat unkept, as this is moulting season.

Have a holiday or vacation coming up? Want to visit the African penguins in Cape Town? You can book a Cape Peninsula tour through our website right now. Alternatively, you can contact us for more information.