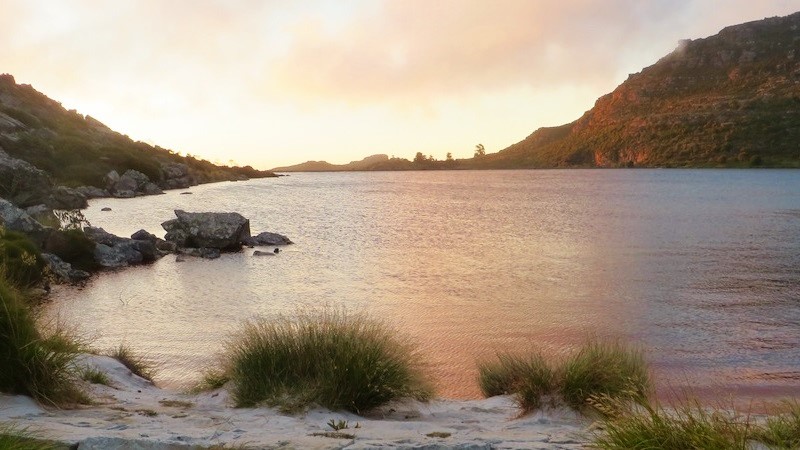 Hiking Table Mountain to the five Table Mountain dams is a wonderful experience. Yet, many people living in Cape Town don’t even know that these dams exist. They were built years ago to supply water to the region.

There are several Table Mountain hiking routes that lead to and around the dams. One can even take the Table Mountain cable car up and then hike across the mountain to get there. Depending on which dam you plan to visit, hiking up Kasteelspoort, Skeleton Gorge or Constantia Nek are the most direct routes.

While you are there, you can take in beautiful natural scenery and breath-taking views. Hiking around the dams at Table Mountain is very peaceful and tranquil and the surroundings are incredible.

History of the Table Mountain dams in Cape Town

During the early settlement years in Cape Town, citizens relied on a single mountain stream for all their water needs. Then, drought hit the town and a new water source became necessary. Thus, hydraulic engineering specialists built a tunnel to source water from the Disa Stream via the Twelve Apostles.

The plan was for the water to channel to the city centre via a pipe running along the Pipe Track. However, as they were constructing the pipe, the city’s population and water demand grew rapidly and engineers realised that the new pipe system wouldn’t be enough. They would solve the problem by damming the Disa. That is, build five new dams capable of supplying water to all the city’s residents. These projects were a success.

Hiking Table Mountain up Skeleton Gorge takes a person straight to Woodhead Reservoir, the first of five Table Mountain dams. The dam, 277 metres long and 50 metres high, was a mammoth project to undertake and complete. As a matter of fact, when construction started, labourers had to hike up Table Mountain and carry building materials to the top. Later, a small steam-driven cable car was built to facilitate the process.

From the cable car station, workers would transport themselves and materials to the location of the dam’s construction site by locomotive. It didn’t take long for the upper station to develop into a trading zone and small town. There was a post office, a bank and a general dealer, perhaps a sneak preview of the thriving, well-developed table top that we know today. The Woodhead dam project was complete by 1897.

The Hely-Hutchinson dam and reservoir were constructed to get more water to what we now call ‘the Mother City’. Understandable, as the demand for the essential resource was continually growing. There was a drainage basin from Woodhead Dam. The water from here was enough to accommodate Hely-Hutchinson, which is named after British governor Walter Hely-Hutchinson. The dam was complete before 1905.

Victoria, Alexandra and De Villiers tapped into the Disa Stream. The Table Mountain dams were built to drive water to the Southern Suburbs of Cape Town. Alexandra and Victoria came first in 1903. In 1907, the De Villiers dam was built. Despite the grandeur of Table Mountain’s lovely dams, today they only supply a small amount of Cape Town’s water. The rest comes from larger dams such as Steenbras and Theewaterskloof.

Hiking to the dams on Table Mountain is great. The hiking routes up are pleasurable and the dams themselves are quite impressive. When hiking to the Woodhead and Hely-Hutchinson dams, consider stopping by the Waterworks Museum. At the museum, hikers can learn more about how the Table Mountain dams developed and see some of the original equipment and materials that were used in their construction.

Note: Safety is important on Table Mountain, especially when hiking to the dams. There are rarely people on these hiking routes, so be safe and make sure that you have supplies. Always hike Table Mountain in groups. Help could be far away. Phone signal around the dam areas is often weak or non-existent.

Want to hike to the Table Mountain dams in Cape Town? Do it with experienced hiking professionals! Check out our hikes here. You can also contact Hike Addicts for information and assistance.